Vedic Mathematics is an ancient Indian Mathematical system. It was given the name when it was rediscovered from the Vedas (Sacred texts of Hinduism also known as Indian Sankrit texts) during the years 1911—1918 by Sri Bharati Krsna TIrhaji (1884-1960). His research during these years claimed that all mathematics is based on the sixteen sutras or word-formulae which can be used for problems in all areas of mathematics, including arithmetic, algebra, geometry, calculus, and comics.

‘Vedic Mathematics deals mainly with various Vedic Mathematical formulae and their applications for carrying out tedious and cumbersome arithmetical operations and to a very large extent’ Tirthaji, B. K. (1965 p.xvii).

Bharati Krsna, born 14th March 1884, was a gifted scholar in science and humanities, but his background showed his main focus was on mathematics. He was also noted for having the ability to speak English fluently and his admirable academic record of a Masters degree in six subjects. Despite his abilities and numerous accolades, Bharati Krsna is most famously known for his rediscovery of the Vedic Mathematical System. Throughout his lifetime, he was able to write sixteen volumes on this mathematical system, but they were unfortunately all lost. However, in the last few years of his life, before his passing at the age of 75, he was able to write a book called Vedic Mathematics, which was finally published five years after his death.

By one more than the previous one (1st Sutra): Squaring numbers ending in 5 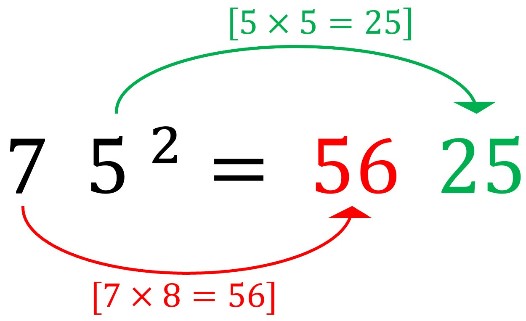 All from 9 and the last from 10 (2nd Sutra): Used for instant subtraction

Vertically and crosswise (3rd Sutra): You do not need to multiply beyond 5×5

This is a particularly useful trick for individuals who struggle to learn their times tables.

If the answer of the last digit is greater than 9, you have to ‘carry over’. For example:

More commonly known as Long Multiplication; however, we can actually write the answer straight away without all the steps using the ‘Vertically and Crosswise Formula’

A ‘trick’ for multiplying by 11

1) You leave the multiplicand alone and they make up the first and last digits of the answer, 2 and 6 respectively.

An easier way for dividing 2-digit numbers by 9

1) The first digit of the dividend will be the answer.

2) The remainder is the sum of the digits in the dividend.

If the sum of the 2 digits is greater than 9, you will have to carry over the number, BUT remember we are working in terms of 9, so you must compensate for carrying ‘10’ over by adding 1 back to the remainder.

Vedic Mathematicsis a mathematical system or collection of techniques which allows us to solve difficult and large number calculations in a quicker and easier way. While many mathematicians have argued that many of these ‘tricks’ are dependent on specific numbers, there still are benefits to studying Vedic Mathematics, such as the techniques allowing us to do calculations ten times faster. Also, these methods can allow children to develop an interest in and eradicate their fear of math.

The Edge Learning Center is Hong Kong’s premier Test Preparation, Academic Tutoring, and Admissions Consulting services provider. Founded in 2008, The Edge has helped thousands of students improve their ACT and SAT scores as well as their IB and AP grades. The AC team has just finished off another successful period in which students gained acceptance to schools such as Columbia, Yale, UChicago, UPenn, Oxford, and more! Check out our latest Admissions Results!