The Pursuit of Fission

As we enter 2021 with a series of firsts, I thought it only prudent to look back at Lise Meitner- the first woman to be appointed a Professor of Physics in Germany. Her name holds neither the recognition nor fame as that of Marie Curie, the first woman to be awarded the Nobel Prize and the only person to ever been awarded the Nobel Prize in two disciplines. She is instead remembered by those who know her as the unsung hero of the nuclear age, the woman who remained loved and respected for her humanity during one of the most inhumane times in history.

During the build up to the Second World War, debate amongst nuclear physicists and radiochemists raged about the structure of the atom. During these uncertain times, Lise Meitner was left with a difficult choice: her work or her life. Germany was being split into those who believed war was imminent and those who could hardly believe the rise of the Nazi party. Whilst Einstein and others, such as Born and Franck, left the country vowing to never return, scientists such as Max Planck and Otto Hahn were convinced that major war was unlikely. Before long, Meitner was trapped and ousted from her position for being Jewish. Coded messages and fake scientific conferences established by Peter Debye, Niels Bohr, Otto Hahn, Dirk Coste, Paul Scherrer, and Manne Sigebahn, to name just a few, finally resulted in the safe passage of Meitner to first Copenhagen, and finally to Stockholm. Although the first physics professor of Germany had fallen from grace, she was safe at last. 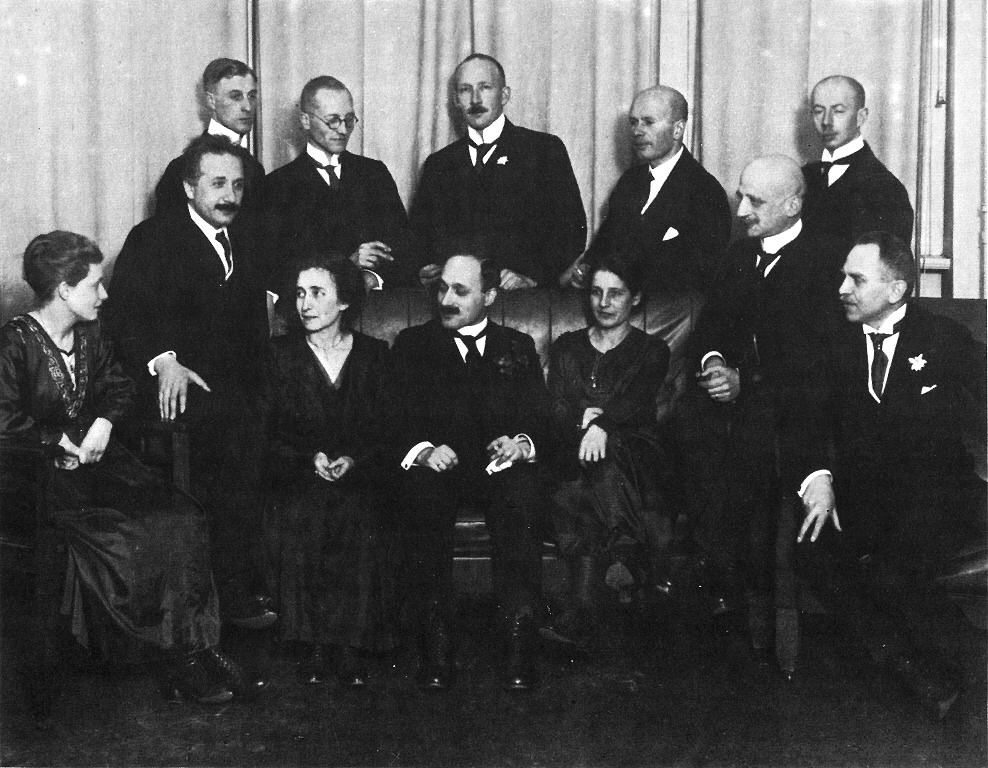 Although Ida Noddack, a leading female chemist who had been nominated Nobel Prize three times herself, had hypothesized nuclear fission as a result of neutron bombardment, the general belief of the 1930s was that the neutron bombardment of a stable nucleus should produce a heavier nucleus. In 1935, Irene Curie and her husband proved otherwise, showing when a stable nucleus undergoes nuclear bombardment an artificial or man-made, radioactive element can instead be created. These two women set the groundwork for Lise Meitner to propose a theory to describe the impossible.

Phosphorus-30 was the first artificially induced radioactive nuclide obtained through the alpha particle bombardment. Irene Joliet-Cure and her husband were awarded the Nobel Prize for this discovery in 1935.

Isolated, barred from access to her bank accounts in Germany, and given an empty laboratory in Sweden incapable of conducting any reasonable experiments, Meitner was left to exchange letters in secret with her former colleague Otto Hahn. Whilst she viewed herself as an advisor on their joint research, the new Nazi regime had barred any research papers to be published under Jewish names. Regardless of her situation, Meitner continued to try and explain the nuclear processes involved in the bombardment of Uranium. After years of careful chemical analysis, Hahn, alongside Fritz Strassmann, confirmed that one of the lighter “radium” isotopes being produced was in fact Barium, an element with just over half the atomic mass than that of Uranium. With no feasible explanation he wrote to his trusted partner: “Perhaps you can come up with some sort of fantastic explanation. We knew ourselves that [uranium] can’t actually burst apart into [barium].” 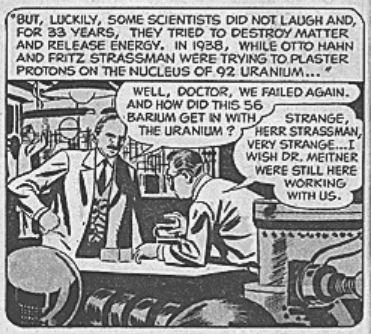 A comic book history of the development of atomic energy, produced by General Electric.

Meitner proposed exactly just that; if the nucleus were to be like a droplet of water, as described by the liquid drop model of nuclear structure proposed by George Gamow and supported by Bohr, then under the right circumstances the droplet might elongate resulting it splitting down the middle into two droplets.

Liquid drop model illustration of nuclear fission. The blue dots represent the neutrons, and the green “drops” represent the splinting of a parent nucleus into two daughter nuclei.

Lise and her nephew Otto Frisch happened to be spending their Christmas holidays together in the winter of 1938. During an afternoon stroll, the nephew-aunt team went on to coin the term nuclear fission, explaining that the surface tension of the atomic nucleus weakens as its charge increases, as a result of the electrostatic repulsion. A Uranium nucleus with a net positive charge of 92 would have a large electrostatic repulsive force, and when bombarded with a neutron it would split into two drops, known as daughter particles, which would be driven apart by their electrostatic repulsion at about 200MeV. However, something about the process was still missing. The two physicists perched on a log in the snow, and with a twig in hand they started to think about the nuclear bombardment itself. They estimated there must be two daughter particles and their respective masses: Barium and Krypton must be created. As their confidence grew in their hypothesis, something was still unaccounted for: the mass of approximately one fifth of a neutron. Meitner quickly realised the missing mass must have been converted to energy, in line with Einstein’s mass-energy equivalence! In this way, Einstein’s theory of famous equation of E = mc2 was able to complete the process. 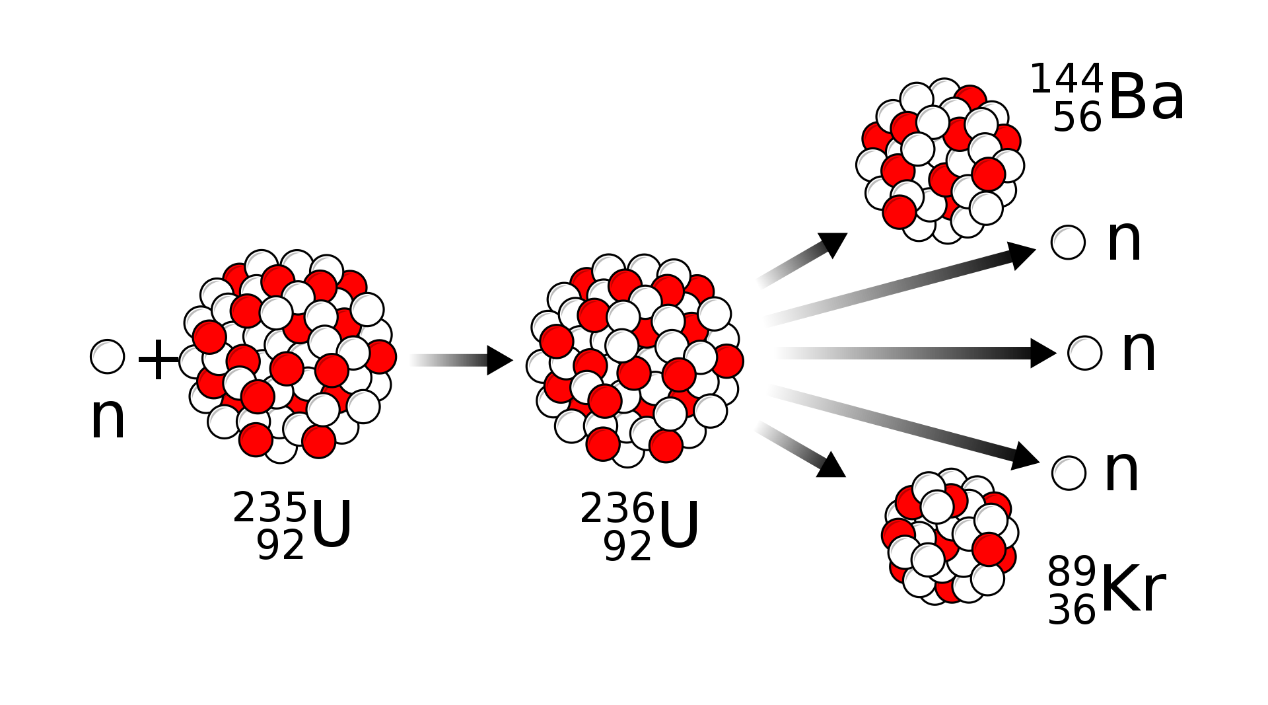 Lise Meitner’s life was filled with tragedy. Her life’s work was ruined by the Nazi party, and she very nearly joined the countless casualties of the Holocaust. She was nominated for the Nobel prize for ten consecutive years and was denied the prize every time. Despite this, she had never held any ill will towards to recipients of the prize- not even towards Otto Hahn who was accredited the Nobel Prize for Nuclear Fission. Despite the dark times she experienced and the horrors of her lifetime, she continued to work undeterred on solving the seemingly insurmountable problems her discipline faced. Meitner consistently refused to be part of any weapons programs during the Second World War, despite her discovery. Her legacy is one of courage and service to the entire human race, and a testament to the enduring power of scientific truth in the face of a crumbling society.  Despite Otto Hahn’s choice to deny Meitner any recognition for her contribution, her family recalls Meitner never voicing anything by deep affection for Hahn. 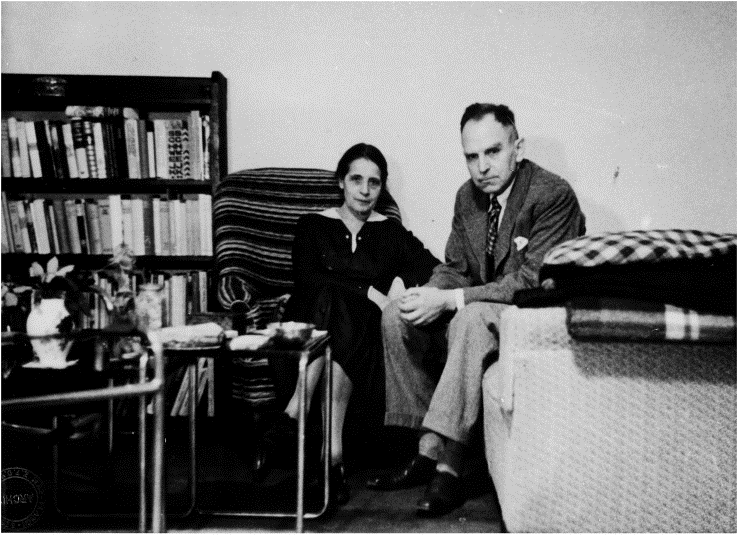