Suppose you are on a game show and given a choice of three doors. Behind one door is the grand prize of a brand-new car and behind the remaining two doors are goats. Say you pick door no.1; the host examines the other two doors and picks door no.3, which has a goat. The host will now ask you, ‘Would you like to pick door no.2 instead?’

Here is the problem: Should you stay or switch?

This is a famous probability based and paradoxical brain teaser that has been seen on numerous game shows, where it was first presented on a then famed American show called ‘Let’s Make a Deal’ in 1975. This problem was coined after the game show host, who first posed this question to his contestants, Monty Hall.

In the same year that this problem was first introduced, Steve Selvin wrote a letter to American Statistician, to explain how this problem could be solved using probability and, despite what many would think, that switching would be a more advantageous choice. Years later Marilyn vos Savant also responded to one of readers who asked the same problem, in her Parade magazine in 1990, that changing their selection is the better option.

However, this solution is based on certain assumptions about how the player and host choose their doors i.e. the player will pick door one and the other door opened is not random. The outcome is also dependent on the following additional conditions:

The answer can be explained by the placement of the goats and using simple probability to count all the possible outcomes. The player a 2⁄3 chance of picking a goat on his or her first choice. Even after the host opens the door with the other goat behind it, this probability does not change. Since the contestant has a higher probability of picking a goat at the start and the host will always reveal the second goat, there is a 2⁄3 chance that if he or she switches doors, he or she will win the car.

The solution can also be illustrated by showing all the possible outcomes. 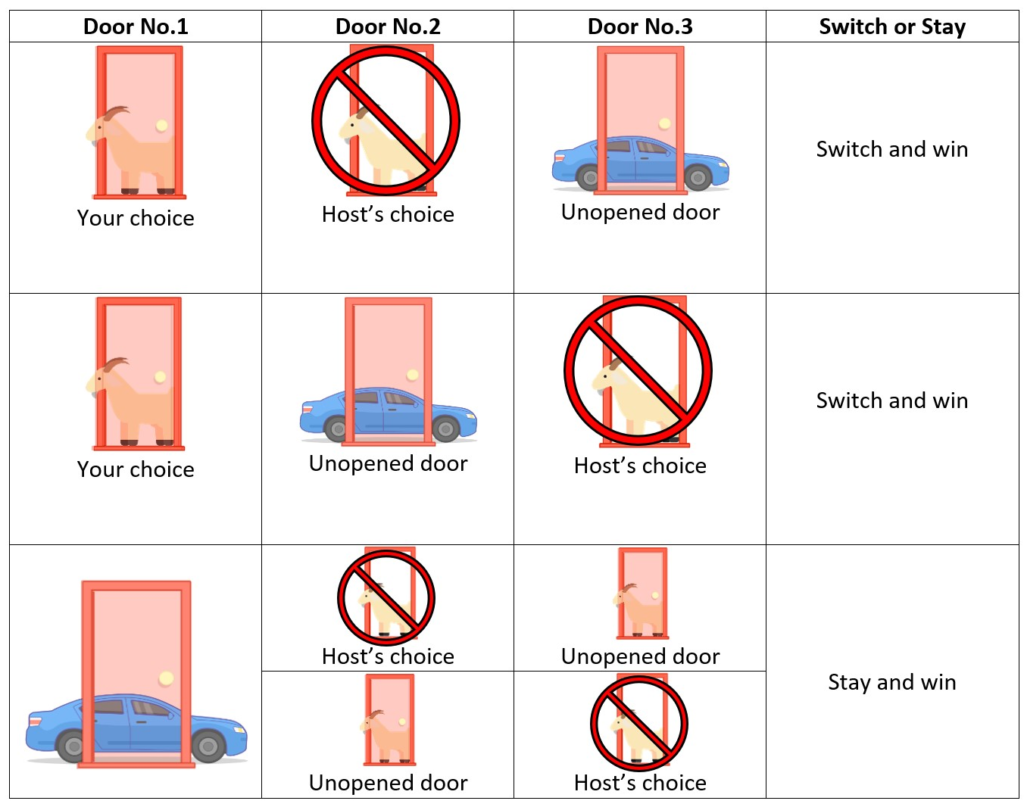 As the diagram above shows, switching doors would by a better option as the player has, overall, a 2⁄3 chance of winning the car. Whereas staying with their original choice only gives them a 1⁄3 chance to win. As mentioned before, there is a greater probability of picking a goat at the start and the host is guaranteed to open a door with a goat behind it, so, as a result, the participant doubles their chance of winning by switching doors.

Even though there have been many mathematicians, who overtime, have proven that the solution above is correct, numerous people and influential mathematicians such as Paul Erdős struggled to believe that this solution was correct. The main aspects that many have not been able to understand and questions are:

All the above questions can be answered by Bayes’ Theorem. It is a formula, derived from conditional probability, that describes how to update probabilities of hypotheses when given 𝙃 and evidence 𝙀, Bayes’ Theorem states that the relationship between the probability of the hypothesis before receiving the evidence 𝙋(𝙃|𝙀) is:

Now applying this formula to our given scenario, we know that every door has either a car or a goat behind it, and so the hypothesis “notH” or (H’) is equivalent to “door no.1 has a goat behind it”. Therefore, Bayes’ Theorem states that:

As the problem states that the host examines the remaining doors and intentionally open a door with a goat behind it, we can break down the component as the following:

If we now substitute all of the information into the formula, we can calculate P(H│E): 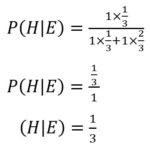 The result for this scenario crucially depends on the host opening a different door from the participant and always has a goat behind it, irrespective of which door was picked first by the participant, P(E│H)=P(E|H1). But what would happen if the host randomly opened a door the player did not pick and had a goat behind it? What is the probability that the contestant’s first choice is correct, regardless of what number door they chose? Then, in this case:

If we substitute this information into the formula: 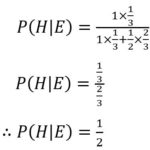 Therefore, there is 50% chance that the contestant’s initial pick is correct when the host randomly opens a door and has a goat behind it.