Chemistry is a big part of our everyday life! Want to know why? Our chemistry tutor, Daniel, is here to share some chemistry lifehacks with you! 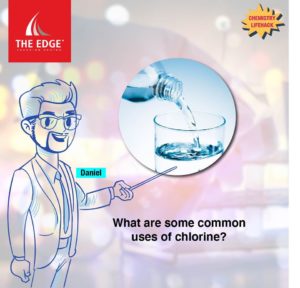 What are some common uses of chlorine?

Chlorine (Cl) is a group 7 element and part of the family of “halogens”, which are the most reactive non-metal elements in the periodic table. Chlorine dissolves in water to give an acidic solution called “chlorine water”, containing hydrochloric acid (HCl) and hypochlorous acid (HClO). Hypochlorous acts as an “oxidising agent” since it gives ip oxygen, therefore allowing chlorine to function as the active ingredient in bleach. Some of the most important uses of chlorine include sterilising drinking water, disinfectants, antiseptics and making PVC (poly(chloroethene)) for various materials e.g. clothing, fabric and windows. 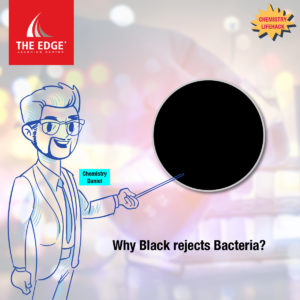 Black clothes may have some effect against bacteria, since black absorbs all wavelengths of visible light, but doesn’t reflect light back. Instead, it releases heat energy, which can denature (break down) proteins in the bacteria and subsequently kill them.
𝗣.𝗦. Black isn’t a colour, it is an absence of visible light. Alcohol is not ethanol!

Alcohol usually contains the molecule ethanol (EtOH for short) which has the molecular formula CH3CH2OH. The OH group is a functional group known as a “hydroxyl”. Alcohol may also contain a molecule called isopropyl alcohol (IPA for short) which has the molecular formula CH3CHOHCH3. So EtOH and IPA are not the same molecule, however, they are part of the same “homologous series” called alcohols, since they contain the same OH functional group. Can bacteria or virus be killed? Which of the habits can boost your vitamins intake?

Fruit juice contains vitamins but water will dilute the vitamin concentration, and juice also contains more sugar like fructose. Eating fruit will give much more vitamins and is a healthier source of sugar. Does Vitamin C help against coronavirus?

Vitamin C (also known as ascorbic acid) is useful for strengthening our immune systems. It is an organic molecule i.e. it is based on a carbon atom framework and contains many “polar” functional groups (coloured in red below) containing the electronegative atom oxygen. Since water (H2O) is also a polar molecule, vitamin C is readily soluble in water, due to “hydrogen bonding” between the polar groups on vitamin C and water.

Vitamin C also aids the body’s production of interferons, a group of “signalling” proteins which cause nearby cells to enhance their production of antibodies (the body’s defence system) when a pathogen such as Covid-19  invades a host cell.

The Edge Learning Center is Hong Kong’s premier Test Preparation, Academic Tutoring, and Admissions Consulting services provider. Founded in 2008, The Edge has helped thousands of students improve their ACT and SAT scores as well as their IB and AP grades. The AC team has just finished off another successful period in which students gained acceptance to schools such as Columbia, Yale, UChicago, UPenn, Oxbridge, and more! Check out the rest of our 2019 Admissions Results!